What does narcissism mean? Am I dealing with a narcissist?

If you’re reading this article, you have probably asked yourself these questions and more. A narcissist, by definition, is a difficult type of person to figure out.

What’s worse, many people don’t even know they are dealing with a narcissist because their traits and behaviors are cunning, and the resulting abuse happens slowly over time.

If you’re hitting up Google with searches like, “Am I in a bad relationship?” or “Why does my partner treat me poorly?” then you very well could be dealing with a narcissist.

But throwing the term “narcissism” into the mix isn’t going to make your problems go away.

Instead, it’s important that you take the time to understand narcissism and relationships in order to make sense of your situation and move on from the way they treated you.

Ready to get started? Here’s your narcissism checklist to get you on the right track:

(Pssst: Be sure to grab your FREE printable narcissism checklist at the end of the post!) 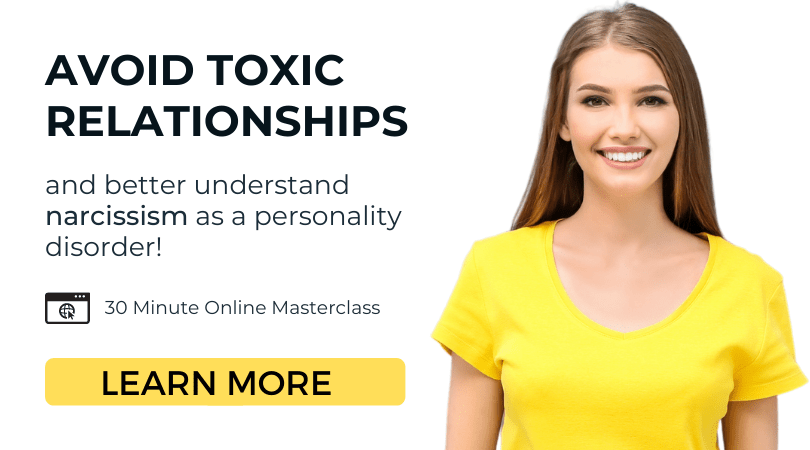 The Cause of Narcissism

Better understanding narcissism is key to knowing that if you are dealing with a narcissist, you did not cause them to become the way they are (as much as they will blame you for this).

While there is no definitive cause of narcissism, this personality disorder can result from a variety of factors such as childhood trauma, parenting, environment, and genetics.

Oftentimes, childhood trauma leads to narcissistic personality disorder. If an individual was abused as a child, the scarring can lead to the development of narcissistic traits.

In most cases, the child was abused by one parent while the other ignored the situation. The child ended up feeling unheard and unsupportive, so they grew up ignoring empathy and developing behaviors to protect themselves.

Even if a child was not abused, the way they were parented could lead to narcissism.

Environmental factors can cause narcissism as well. Narcissism is more prevalent in cultures that focus more on individualism and less on the collective community.

Lastly, it has been shown that genetics can play a role in narcissistic personality disorder. Twin studies have shown that some narcissistic traits are hereditary. However, there is not enough solid evidence to show that narcissism is completely genetic.

Read More: Is There a Root Cause of Narcissism?

Narcissistic personality disorder (NPD) is characterized by an abnormality or distortion in thinking and perception of the self. It is a diagnosable mental health condition, although those with NPD rarely seek treatment due to the nature of their symptoms.

Narcissists have a consistent pattern of behaviors that cause negative effects on the lives of others.

The common traits and behaviors of narcissism include:

While it’s not uncommon for people to display narcissistic traits every now and then, narcissists will repeatedly behave in certain ways in order to manipulate their partners and gain control.

Here are some narcissistic red flags you can look out for:

They Rush You Into a Commitment

Narcissists come in hot and heavy with the charm in order to rush you into a commitment and trap you in a relationship.

They will shower you with compliments and make you feel like a superstar before they get to know you.

They will also try to form superficial connections by heavily emphasizing the things you have in “common.”

They Play the Victim ALL. THE. TIME.

Narcissists are notorious for displacing blaming and denying responsibility so they will blame every shortcoming in their life on everyone else.

Basically, nothing is ever their fault, and every story they tell is a pity party to displace guilt and avoid responsibility.

Plus, they will villainize the people in their stories yet they treat others the same way they claim to have been treated.

They Have Few Friends

Narcissists are incapable of forming deep connections, so you may notice they have few or no friends.

This is because once a person figures out what they are and cease to feed into their sense of superiority and self-importance, they will drop them and move on.

They will also keep you away from people in their life because they don’t want you to learn the truth about what a horrible person they are.

Again, narcissists refuse to take responsibility for anything, even if they hurt you or do you wrong.

They will deflect guilt and make it your fault instead.

They will also never try to compromise with you because they are always “right,” so arguing with one ends up being angering and frustrating.

They Lose Their Minds If You Try to End the Relationship

If you aren’t discarded by the narcissist and try to leave the relationship, the narcissist will go into panic mode because they want to keep you where they worked so hard to put you.

They may love bomb you, make false apologies, and make false promises. If this doesn’t work, they will turn against you and blame you for everything.

Read More: What Does a Relationship With a Narcissist Look Like? 8 Red Flags to Look Out For

Narcissistic Abuse: What Do They Do?

Narcissistic abuse is a form of emotional abuse caused by narcissistic behaviors such as belittling, invalidating, and manipulation.

The symptoms are similar to those of PTSD (post-traumatic stress disorder) and can include emotional triggers, detachment, isolation, flashbacks, and avoidance.

Narcissists are cunning and they know how to manipulate people and slowly trap them in a relationship. They use a specific cycle in order to achieve this:

Gaslighting is a power-gaining tactic used by narcissists to control their victims by forcing them to question their own realities, perceptions, and memories.

They lie, deny, and accuse in order to convince you that something didn’t happen (when you know it did). They then use love and flattery to confuse and guilt you so you come to accept what they say as truth.

To give you a simplified example, say you are eating with the narcissist and they steal a fry off your plate. When you say, “Hey! You took my fry!” they respond with, “No I didn’t. You’re seeing things!”

Gaslighting involves doing this throughout the relationship so that you become dependent on the narcissist to know what is true and what isn’t. It happens slowly and deliberately so that you don’t even realize what’s going on.

Narcissists do not care about the feelings of others and will belittle or demean your emotions in order to trivialize and invalidate them. They’ll accuse you of being too sensitive or overreacting when you bring up how they have hurt your feelings.

The narcissist does this for three reasons:

First, they brush off your emotions so they don’t have to take any responsibility. Second, your feelings will never be as important as theirs. Third, they want to confuse you so that you eventually stop believing that you are being mistreated.

Love-bombing usually happens early on in the relationship during the idealization stage, where they make you feel like the luckiest person in the world by laying on the charm.

During the relationship, they may love-bomb you following an argument in order to placate you, displace their responsibility, and maintain their control over you.

Our brains get addicted to good feelings, so the narcissist uses love-bombing to give you that “happy high” in hopes that you will stick around in case it happens again.

Hoovering is a form of emotional abuse used by the narcissist when they feel that you are pulling away or even after you have left the relationship. It’s their attempt to draw you back in so they can repeat the cycle of abuse.

When a narcissist tries to hoover you, they will usually act as if nothing happened. Because they won’t admit to any wrongdoing, they will sweep the situation under the rug and try to continue business as usual.

They may apologize and try to convince you that they have “changed.” However, narcissists do what works for them at the expense of other people so their apologies are pure performance.

Narcissists may proclaim to love you deeply and dredge up all of the “good” times you had together. They may tell you that you are the only one for them to make you feel special.

If these touchy-feely tactics don’t work, they will resort to threatening you back into the relationship. They may spread rumors about you to alienate you from your support system or accuse you of ridiculous things in order to provoke you into a conversation.

Read More: Narcissistic Abuse Syndrome: What It Is and How to Heal

How do Narcissists Treat Their Children?

We’ve talked a lot about narcissistic traits and how they treat you, but if you have kids together, how do narcissist treat their children?

Narcissists are not wired to parent in healthy ways and this could tie into the way they were treated during their childhood. However, it is mostly due to the fact that narcissists operate only to serve their own self-interests.

Here are some ways that narcissists treat their children:

Read More: 10 Signs That Your Ex is a Narcissistic Parent

There are some catchy and clever terms out there to describe narcissist and narcissistic behavior. These terms can help you understand your experience with a narcissist and help you heal from the abuse:

Read More: 20 Narcissism Terms You Should Know to Understand the Narcissist

How to Deal With Narcissistic Behaviors

Simply understanding how a narcissist operates is not enough to mitigate the conflict they create in your life. Whether you are with a narcissist, have left one, or have a child with one, here are some ways you can deal with their behaviors:

It wouldn’t be a narcissism checklist without an actual checklist, right?

Click here to download your FREE narcissism checklist. This will help you make sense of your situation and gain some clarity on what’s happening to you.

And feel free to share your stories in the comments below!